Strafford County Department of Corrections was awarded the 2013 Governor’s Accessibility Award.  This prestigious award is given out in recognition for leaders in NH communities who adhere to the best practices and/or offer services that are inclusive to individuals living with a disability.

On July 23 2013, representatives from the Strafford County DOC line staff, operations, medical, programs, and Community Corrections Department traveled to the Executive Council Chambers at the NH State House in Concord.

At 1300, Governor Margaret Hassan presented our Department with this award and the following citation was read:

Be it hereby known that I,

Governor of the State of New Hampshire, join my fellow

Citizens in extending my personal best wishes and sincerest

In recognition of being awarded the 2013 NH Governor’s Accessibility Award in the Public Business category.  The dedication of the Strafford County Department of Corrections staff to creating an inclusive, accessible environment for both your volunteers and your inmates is admirable.  Your efforts to improve accessibility within your facility, programs, and services go beyond the efforts of other public institutions.  Through your case management, education opportunities, and rehabilitative programs, your work helps individuals safely move back into society when they have served their sentences.  On behalf of the citizens of New Hampshire,  I commend you for your hard work and wish you all the best in the future.

I would like to thank Dr. Candace Cole-McCrea, not only for her nomination for this award,  but also for her continued support in the rehabilitation of our Inmates.  That in itself, means the world to us.  I am proud to have her as part of our team.

Thank you all for the great work  you do every day. You continue to make Strafford County shine. 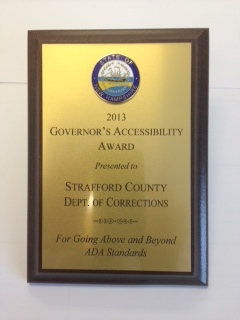